Out of History Comes a Story, “The Great Aul” by R. T. Lawton

R. T. Lawton is the author of several different series appearing regularly in AHMM. He is a former federal law-enforcement officer and he blogs for SleuthSayers.org. Here he writes about the background of his tale “The Great Aul” from the July/August 2016 issue.

The tomes of history are rich with strong characters whose actions influenced the future of nations, entire civilizations and even the course of world events. Much of known history is written by the winners, some accounts are retold by survivors of that same happening and some events are documented by independent observers who have no axe to grind concerning the facts or truth of those events. Often the perspective or alleged truth depends upon the teller of that history and many times there are gaps in what gets told. These gaps are fertile grounds for an author of fiction to create his own version of the story.

For centuries, the Tsars of Russia had pushed their country’s border southward into the Turkic lands. Their invasion vanguard usually consisted of freebooting Cossacks who lived in stockade villages along the frontier and raided their Muslim neighbors by horseback or by sea. Eventually, after many rebellions by the freedom loving Cossacks against their own Tsars, the Russian army quartered soldiers in each frontier village, made these Cossacks into subordinate military units and launched their own massive spring campaigns into Chechnya to subjugate the various hill tribes. 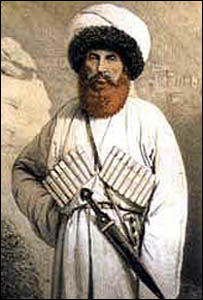 One of the opposition leaders was an Imam named Shamyl, who led a group of religious Chechens and Daghestans known as Murids in the northern Caucasus. At one point, the Russians offered to broker a peace treaty with the Murids. In order to guarantee the safety of the Russian negotiators, Shamyl was forced to give up one of his sons as a temporary hostage. The Russians, acting in bad faith, promptly whisked the young boy off to Moscow, Russianized him over the years and made him a cavalry officer in one of their units.

During the summer of 1854, Shamyl put a plan in motion to recover his now grown son. On the morning of July 4th, a detachment of Murid horsemen clattered into the Tsinandali palace courtyard of King George XII, the last king of Georgia and an ally of the Tsar. They seized the two princesses, their children and their governesses. The women were tied to the horsemen’s saddle frames and the small children were stuffed into large saddlebags. In short time, the entire group rode off into the mountains headed for the Great Aul, a mountain fortress in the heart of Daghestan. Imam Shamyl had plans to trade the hostages for his son Jamal al-Din (various spellings depending upon the source). As a matter of history, the trade did take place, but there is a gap in the details.

Constantly researching for more Russian history on their invasion into the Caucasus to use as story background, this event is a great find for me. I already have two story characters, the Armenian and his helper the Little Nogai Boy, trading goods with the Cossacks on the Terek River and with the Chechens south into the Wild Country. Since the Armenian is already trusted by people on both sides of the river (as shown in previous stories), who better to act as intermediary for the exchange of hostages? These two fictional characters can fill the existing gap and write their own story as to their part in what happened.

It’s now time to invoke the writer’s famous What If . . . clause. What if the Armenian and the Little Nogai Boy are crossing a shallow river deep in the Wild Country when the raiders fleeing with their prisoners happen upon them?

The Story is Born:

The young orphan boy, from the Nogai split out of the Great Mongol Horde after the death of Genghis Khan, tells “The Great Aul” story as he sees these hostage events through his own eyes. Using the young boy as the Point of View also allows for a more emotional impact upon the reader at the end. So, let’s get down to the bare bones.

Our two protagonists, all their trade goods, plus their string of pack animals are taken by the Murids and are forced to travel along with the hostages to The Great Aul high up on a mountain top. Here, the Armenian is offered freedom for himself and his helper if the Armenian takes a letter from the Imam to the Tsar, offering the Georgian hostages in exchange for his son Jamal. However, the Nogai boy must stay behind to ensure the Armenian’s return.

It’s a long trip to Moscow and back. Many things could happen to the Armenian along the route, and the boy doesn’t know if his master will even return to get him out of the aul. To pass time, the boy starts selling their trade goods in the local market place and making his own plans for escape just in case things don’t work out according to the plan of others. But, he has to be careful in his actions because he is closely watched by one of the Murids assigned to guard him, a Murid who has lost his entire family to earlier Russian incursions. Plus, it seems not all Murids are happy to have outsiders on the inside of their fortress.

Sorry, but that’s all you get here. To find out what becomes of our young orphan after the Imam’s son is returned, you’ll have to read the story for yourself. If you are female, you might want to have a tissue handy. If you’re a guy, well, you’re on your own.

In any case, be sure to leave a comment after you read the story.

Filed under How'd That Happen

3 responses to “Out of History Comes a Story, “The Great Aul” by R. T. Lawton”